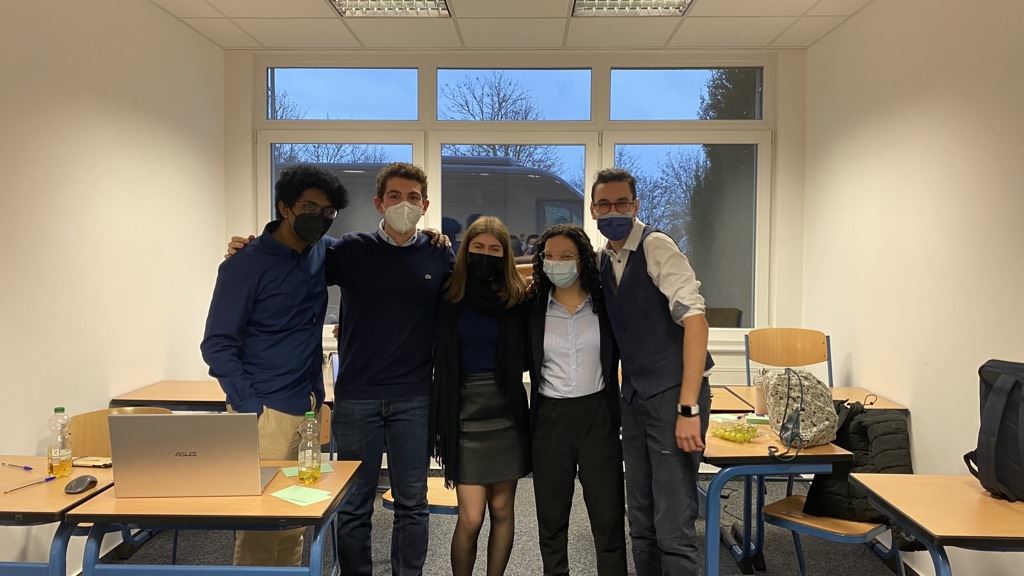 After a lot of preparation and one practise run, the Debating Society of Germany (DSG) Senior League Debate Tournament got underway on the 26th of November.

The ISF Alpha Team were keen to get underway and started the afternoon off supporting the motion: This house believes that in families with two parents, both parents should have the same amount of parental leave.

This was an impromptu debate, so we were given the motion and then had one hour to prepare our arguments with only the help of our general knowledge - and a dictionary.

We were up against AEG Böblingen and, after a few technical difficulties, we got underway. Agostina, our first speaker, opened the debate talking about the economic and societal benefits such a policy could have. She was ably supported by our second speaker, Francesco, who discussed the psychological benefits this would have for both parents and children. They argued the case strongly and Selim, our third speaker, did an excellent job of rebutting the opposition's points and summarising our case.

The judges clearly agreed with our Team line - 'for a brighter future' - and we were awarded our first win of the 2021-22 season in a unanimous decision. The afternoon was off to an excellent start.

After a short break, we were ready for our second debate of the afternoon against JKG Stuttgart. This was a prepared motion, meaning that we had been able to research, prepare, and practise in advance of the actual debate.

In this round we had the job of opposing the motion: This house regrets the portrayal of the electric car as a sustainable technology. This was certainly one of the trickier motions we had come across.

In opposition, we had to respond to the case as laid out to us by our opponents, refuting their points along the way whilst simultaneously building our own argument.

Selim, our first speaker, focused on the impact electric cars can have on the environment, their sustainability, and how this has been portrayed by the media. The key word in this debate would be 'portrayed', and we had spent time re-organising our arguments to focus specifically on this.

Mihir, our second speaker, delved further into the ins and outs of media portrayals of electric cars and the reasoning behind this, and Yasmin, our third speaker, summated the key points of our case against this motion.

Third speakers are in the unenviable position of having to write the majority of their speech during the debate, as their main role is to refute the arguments made by the opposition. This definitely requires some quick thinking.

After some deliberation, the judges awarded the victory to JKG Stuttgart. The debate was a close one, and we were unfortunate not to come away with the win.

Congratulations to Agostina, Francesco, Mihir, Selim, and Yasmin on a good start to this year's competition!

The next rounds of the DSG Tournament will be taking place on the 5th of February and we will be sure to keep you updated on our progress.

In the meantime, we have Emma, Selim, Mihir, and Nihal competing in the Winter Holiday Open Tournament on the 11th and 12th of December. Unfortunately, we cannot travel to Croatia this year, but this does mean that there will be an extensive and varied international opposition.

We wish them all the best of luck!