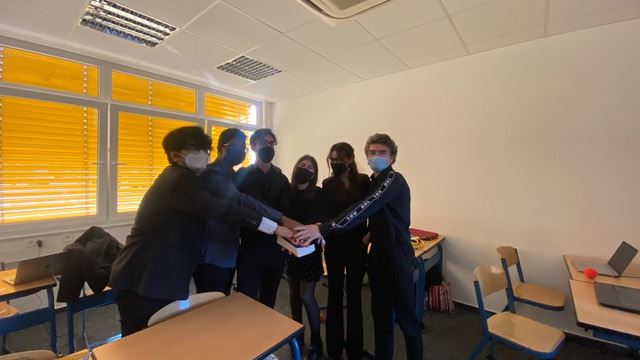 Congratulations to the Senior League Debate Team who finished the season in 6th place!

We had the final four rounds of competition last weekend, as well as the first of the knock-out rounds. It certainly made for a busy weekend.

We started on Friday afternoon with the first of the three impromptu debates for the weekend. The motion was: This house would extend the deadline for the closure of nuclear power plants in Germany. We were proposing this motion, which made for some hasty brainstorming of exactly what we knew about the topic.

Francesco, Mihir and Agostina worked quickly to come up with a model (framework) in the allotted hour and argued that, in the present climate, it would be more practical to extend this year’s deadline for another three years. After that, everything would be reviewed, and the shut-down process could be completed safely and successfully. Unfortunately, we our arguments did not convince the adjudicator and we lost the debate.

Our second debate was a prepared one and we were ready to argue against the motion: This house believes that universities should admit students for degree programmes randomly, rather than based on their grades. This was something we felt strongly about, given all the exams required to get IGCSEs and the IB diploma.

Nihal, Mihir, and Sarah Jane put together a strong argument and delivered their point of view with aplomb, something appreciated by both the adjudicator and the opposition, who both complimented the speaking style of the ISF Team. After a very well-matched debate, we were very unlucky to lose by half a point.

Saturday we started off again with an impromptu debate, this time opposing the motion: This house prefers a world in which people are incapable of lying. A more philosophical debate than the previous one, we constructed our argument around human development, personal motivation, and the importance of storytelling. We felt that we had a convincing case.

Bennet, Francesco, and Sarah Jane argued our case strongly, highlighting the importance of giving children age-appropriate information, particularly around current events, as well as emphasising the need for fiction and imagination. The philosophical focus of our argument swung the debate in our favour and we walked away with a unanimous victory, our fourth of the tournament so far.

Saturday afternoon’s prepared motion saw us arguing in favour of the motion: This house believes that developing countries should not sell land to individuals or companies from foreign countries. This was an interesting topic and certainly relevant with the rise of trans-national corporations and an increasingly global society.

Francesco, Agostina, and Sarah Jane convincingly argued for the motion using already-widespread examples of contract farming and focusing on autonomy and the International Declaration of Human Rights. Fortunately for us, the adjudicators also found our argument convincing, and we won a unanimous victory.

With five wins from eight debates, ISF finished in 6th position overall, out of 32 teams, with a total of 5874,75 competition points. This is an excellent achievement and a testament to the hard work the team has put in over the season.

Sunday morning was the beginning of the knock-out rounds. We were drawn against Kolleg St. Blasien for this impromptu debate. We won the coin toss and elected to be side proposition, before receiving the motion. Once we received the motion, we realised that we had the more difficult side of the argument.

The motion was: This house believes that conscription is never morally justified. Arguing for a moral absolute is difficult, as we had to prove there are no instances where conscription might be acceptable. We argued that forcing people to fight against their will was morally unjust, the military exists to fulfil that purpose. People can choose to fight, and that patriotism should not be manipulated. Team Opposition argued that in times of war it is necessary to conscript people to protect their country.

The debate was very even, and fast-paced and the result reflected this. We were unfortunate to lose in a split decision, 2:1 (similar to losing on penalties). A very close end to the season.

Congratulations to the Competition Team for the hard work over the season. You all did exceptionally well and should be very proud of the results you have achieved and the skills you have gained. Well done to Yasmin, Mihir, Francesco, Agostina, Sarah Jane, Nihal, Bennet, and Selim.

Special mentions must go to Yasmin and Mihir for their leadership as Captains for the 2021/22 Senior League Season. Your hard work has been much appreciated.