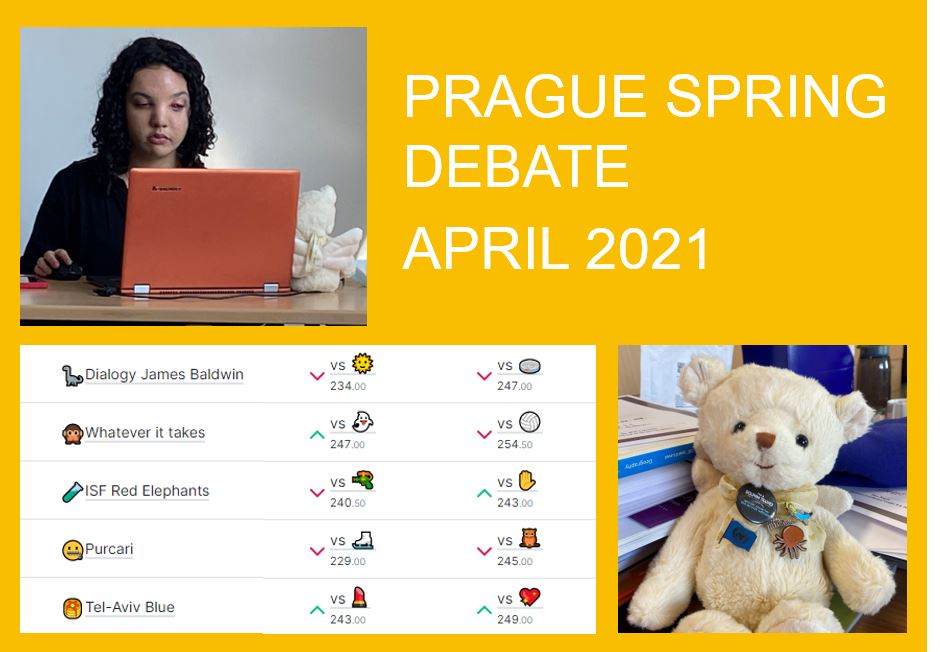 Should we ban all paid political advertising? Should we keep online stock trading so easily accessible? Do you support violent protests? These were some of the issues that were considered by the ISF Senior Debate Team during the Prague Debate Spring Tournament.

78 teams from all over the world

The tournament was hosted by the Czech Debate Society and took place, as with most tournaments this year, over Zoom. This did have the added benefit of allowing 78 teams from all over the world to compete.

ISF fielded two teams, the Dolphins and the Red Elephants, to compete in their first tournament, an exciting prospect for all involved. Over the weekend we competed against schools from China, Israel, Lithuania, Slovenia and Korea.

Wins in the impromptu rounds

Over the two days, the students were involved in five debates - three impromptu and two prepared. The motions for the impromptu debates (released one hour before the debate commences) were:

Keeping up with current events was fortunately part of our preparation, as all three of these issues had been in the news in the weeks prior to the tournament. They definitely made for some interesting and rather heated arguments, especially in an international setting.

Both teams scored a win in the impromptu rounds, with the Dolphins winning the debate in support of violent protests, and the Red Elephants besting their opponents in their support of banning racist and sexist books.

The motions for the prepared debates were:

Again, both of these issues have been heavily in the news recently, especially Gamestop, which enabled our debaters to show off their knowledge of economics. The Red Elephants scored a win in their opposition of the motion on the legalisation of substances.

Everyone had a thoroughly enjoyable weekend and did an excellent job of honing their skills. Having legitimate reasons to debate against people on the internet was good too. Congratulations to Francesco, Nihal, Yasmin, and Sarah Jane; Selim, Mihir, Ishani, Emma, and Yunus on an excellent competition. We’re all looking forward to the next one!