Second Place for our U18 Boys' Varsity Football Team 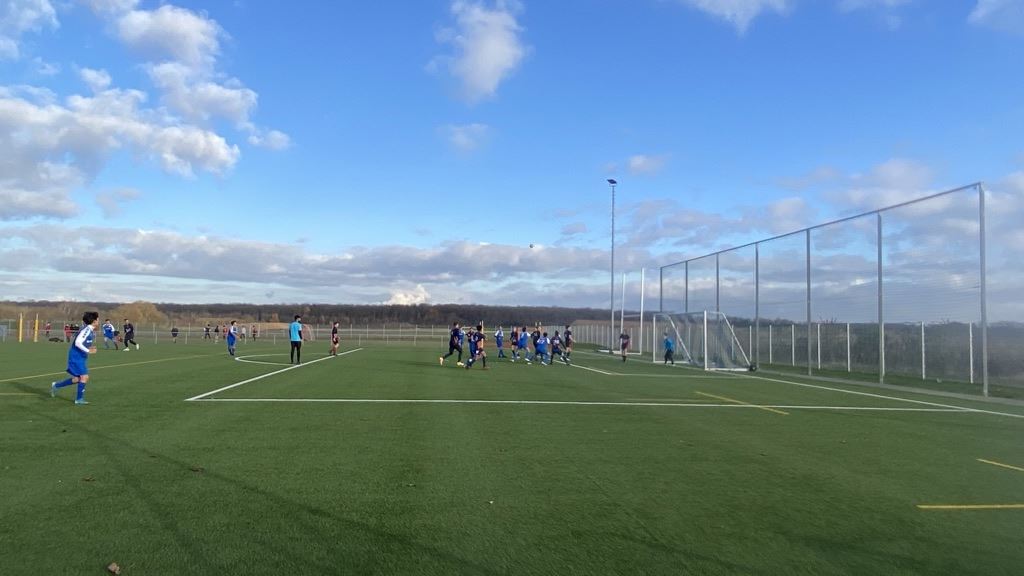 On Saturday, the Boys' Varsity Football Team travelled to St. George's in Köln for their GISST.

Whilst our 6.15 leaving time made for a very early start, everyone made it on time, and in varying states of wakefulness, so we could set off.

Upon arriving at St. George's, it was immediately apparent that warming up would be important to prevent everyone from freezing. It wasn't long before we had our first game against St. George's 2.

The game got off to a good start, with everyone eager to get moving and keep warm - and win of course. ISF did a good job of putting St George's under pressure and played the majority of the first spell inside the opposition's half.

The hard work paid off and ISF was rewarded with an early goal, scored by Lukas Heinzmann.

The Team kept up the pressure throughout the second half, as did the opposition. Unfortunately, the pressure didn't quite translate in to points, as their defence thwarted ISF's subsequent attempts on target. However, fortunately for us, we were able to do the same to them and successfully won 1-0.

After a snack break and time to warm up inside, ISF ventured back out for the second and final match of the day against St. George's 1.

This game got off to a very quick start and it was very clear that the two teams were very evenly matched. After a prolonged period of attack, in which our defenders stepped up and did a fantastic job, St George's were able to sneak one through and opened the scoring. Despite our best efforts we were unable to equalise in the first half.

We began the second half with renewed vigour and attacked and defended well. Our defence was certainly tested, but fortunately we held it together and were able to block all further shots on goal.

After a sustained period on attack, and a few shots on target, we were awarded a penalty mid-way through the second half. This was ably taken by Antoine Knoch, who scored a superb equaliser, bringing the score to 1-1.

The match ended in a draw and ISF ended the day undefeated.

Ultimately, we came in second place based on goal differential, an excellent achievement for a team who hasn't long been together. ISF was also awarded the Fair Play Trophy, as testament to our players' sportsmanship and hard work.

We have many people to thank for putting the trip together: